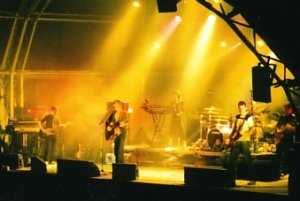 The Spanish never change. They're just far too laid back for your average Brit to fully comprehend. The mańana mentality seems to permeate almost everything they do, whether it be building cathedrals, service in restaurants, or as I found out, putting on music festivals. If something can be done tomorrow, the Spanish will do it tomorrow! It was almost laughable - but entirely understandable - that Pulp weren't due on stage at this fab little festival until 1.15am. And they weren't even the headliners.

But this festival didn't do mud, it didn't do dodgy burgers and noodles, and it certainly didn't do smelly portaloos. The vibe was good and the location perfect. The stage was erected in an old square, almost like what you'd find in a quaint English market town. Strangely enough, it was only a stone's throw from the Olympic stadium and only a short walk from the Teatre Grec Ampitheatre where Russell played in his last ever Pulp gig.

As is inevitable with Pulp, if they can come on a quarter of an hour late, they will do. So again, it's not exactly shocking that the first sniff we get of them is just before 2am when Mark casually strolled across the stage over to his keyboard. He got a rapturous applause, and for the next couple of minutes he commanded the stage, producing a quirky synthed-up intro to F.E.E.L.I.N.G.C.A.L.L.E.D.L.O.V.E while the rest of the band meandered into their places. It's the last song you'd expect them to open with, but at such a usually chilled-out hour, it was just the ticket and sounded as atmospheric as ever. With Nick pounding out that familiar beat, it was Jarvis' turn to lap-up the attention, and he eventually scurried out wearing his brown jacket and trousers over a yellow t-shirt.

Afterwards, Jarvis welcomed us and said how much he didn't want it to rain on us all. Although the rain was holding out, it did wee it down whilst the roadies were setting up Pulp's equipment. In any case, Jarvis and the band are always sheltered by the stage but it's kind of cool that he cares. You get the feeling the poor lad worries more about whether we're enjoying the show than about getting his own performance right. But again, that's no bad thing. 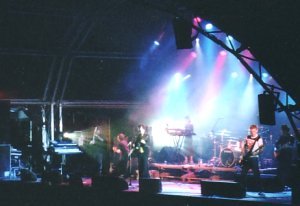 What happened next was quite strange, for the next four songs appeared to be lumped together in the set so Jarvis could play the acoustic guitar throughout. They started off with The Trees, which quite a few of the audience seemed to recognise. It's always a lovely song, but you do miss him being able to prowl across the stage, contorting his body and wofting his fingers about at you, which is why it was so strange to see him stuck behind his guitar for 20-odd minutes. After Trees came an average performance of Sorted For E's & Wizz followed by the wonderful Laughing Boy, with Jarvis explaining that it was about people staying over at your house ("Three days is okay, but one week is taking the piss.") The acoustic guitar stint came to a fabulous close with the epic and twice extended working of Live Bed Show. If this song didn't win the sceptics over to Pulp, then I've a feeling nothing would have done, and at the end of a blissful eight minutes, you wouldn't mind if Pulp wanted to jam away at it for twice as long again.

With Bad Cover Version, Jarvis was back on the loose again. He shuffling around the stage looking for podiums to jump off, walls to climb up and monitors positioned close enough together for him to bridge the gap with his ridiculously long legs. He eventually settled on the drum riser and playfully assisted Nick by smashing a cymbal with his microphone - something he seems to enjoy doing quite a bit nowadays. It wasn't until this song that I clocked the absence of Jarvis' short films that are usually projected across the back of the stage. The one for Bad Cover Version is a slowed down clip of a 70s looking band playing on a stage backed with shiny tinsel. It's strange the things you remember, but I'll always think about that clip whenever I hear the song. I also wondered if anyone would expect Cher, Liam and Meatloaf to come on stage and start singing along with Jarvis - now that would have been class!

I think someone threw a t-shirt on the stage during Bad Cover Version and afterwards Jarvis mockingly told the person not to blame him if he caught a cold. He thanked the person for the shirt "because England is a cold country." Jarvis went on in this scarcastic manner... "But they say 'Cold hands, Warm heart.'" [pause] "But that's bullshit cause everybody's a c**t in England." Something suddenly must have taken him over because in an instant he was transformed from normal Jarvis to a drunken, rambling and unco-ordinated Jarvis (it was very funny though!) Having to wait until 1.50am to take to the stage does give you quite a bit extra boozing time, but the post-Scott Walker Jarvis seems to understand that you don't have to be numb around the edges to give a good performance. Either way, the audience seemed to find him funny and I was pleased that he talked to us just as much as he would at a festival back home.

During the show, he even asked why there was so much rice on the stage... "has anyone got married?" I thought this was a cunning way of mentioning the 'm' word and for a minute I thought he was going to publicly tell us about the.. ah hem... WEDDING... but he sensibly opted to get on with the show, sensing perhaps that the Spanish wouldn't give an arse about his private life. 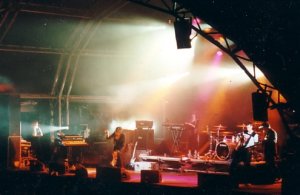 Weeds followed with more prowling about from Jarvis which climaxed with him on all fours hunched by a monitor. His silly pills really kicked in at this point. He was getting even dafter as he was shouting and swearing at an imaginary doctor... "you said I could walk," he screamed, acting as if he was paralysed and pretending to struggle to get upon his feet. Limping across the stage, still shouting at the doctor, and still in his hilarious role-play world, the band finally put him out of his misery and started to play Help The Aged. Aaaah! So that's what it was all about. He might almost be 40, but I expect those legs will have a bit more life in them yet! Mind you, with Monty Python-style performances as good as that, he should forget his ambition to direct films and start acting in them instead, and if we keep getting this kind of introduction to the song, I hope they play it forever.

Dark-edged epics The Fear and This Is Hardcore confidently rounded off the main set. But before Jarvis could even start singing about 'what goes in where', Mark stomped off the stage, either embarrassed at not having anything to play or gagging for the loo. Or maybe both. Whatever his reason, it cracked me up to see it. Minutes later and the rest of the band filed off the stage for what I increasingly find the most nerve-racking bit of Pulp concerts. They obviously come back on, but you just can't tell whether it'll be for one more song, or another five.

Earlier that day I was lucky enough to hear their soundcheck and was stunned to find myself humming along to an old favourite that they hadn't played in donkey's years. I wasn't entirely sure Jarvis got all the lyrics right and it didn't seem polished enough for them to play later that night, although the setlists did include it as the first song they were supposed to play in the encore. But the gods of Pulp past weren't smiling on us that night, and they decided not to play it. I've a feeling they're going to rehearse the song a little bit more and are saving it up for the UK Forest Tour - I won't spoil the surprise, except to say that most of us haven't been Pulp fans for long enough to have heard them play it live. Exciting stuff! 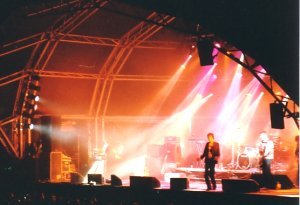 But by way of compensation, when the band were ready for the encore, Jarvis got up to his antics yet again and did a little flamenco dance for the audience. Bent double, he stomped about the place like a drunken giraffe, but the crowd love it and start clapping along and egging him on. What a star! Joyriders eventually opened the encore which commenced with a ballerina-like quality - gently tiptoeing and swaying about until the band really decide to stick the boot in with crunching guitars and pounding drums. Afterwards, Candida hopped down from her dinky keyboard riser as if to call it a day, until that is, Jarvis threw his hands towards her and shooed her back up. Poor girl - it was gone 3am and only Jarvis seemed to have the energy to carry on, which they effortlessly did with Babies. The feeling you get when you sing "Yeah yeah-yeah yeh yeh yeaah" with a couple of thousand other people never stops being so enjoyable.

The Babies frenzy over, the post-orgasmic mood felt just right to hear Something Changed followed up by a magical performance of Sunrise which easily got the biggest cheer of the night. With the storm clouds far away, we were 'snug and warm under an eiderdown sky', and for that one moment, you could have almost expected the sun to rise with the music and for the music to paint the colour back into the day. And with that, a 1 hour 20 set, and their music still ringing in our ears, Pulp were off to bed and the Spanish were off to party 'til dawn.